Posted on February 11, 2018 by historicgardener — 2 Comments

I was sad to hear that the Gardener’s Hut at the Prebendal Manor Medieval Gardens was demolished on Saturday 10 February 2018.

It had been a favourite project of mine and I had spent many hours constructing and maintaining the building. I did not keep written records of the work, so this is mostly from memory. The order of building is correct but how long it all took is forgotten.

My longstanding friends, Sam Martin and Tim Mason, who had been founder members of possibly the second medieval society to be set up in the UK, the Knights of the Fettered Swan, and fellow pilgrims, had presented the plans and the wood for the frame. The wood was elm from young trees that Sam had cut down when he split his garden for sale. The wood of elm is hard and equally importantly, it resists water; in the past the trunks of elm trees were hollowed out to make water pipes. Tim worked in construction, so he had produced a good plan.

Work to build the frame began late summer in 1999. The joints were cut and pegged to create a frame that would be, coincidentally, roughly the size of the sleeping area of some of the buildings at the deserted medieval village of Wharram Percy in Yorkshire. John James, another friend ex-knight and pilgrim also helped with building the frame. 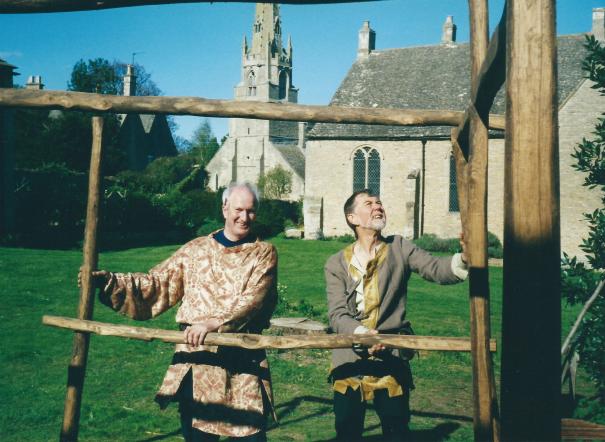 This took several days spread out over numerous weekends. By that time, it was well into autumn, perfect for cutting the willow and hazel to make the wattle inserts. I had planted a good coppice to supply firewood for the manor, so suitable wood was not a problem.

I admit we cheated and used an electric drill to drill the holes to take the uprights, but everything else was cut manually. The holes in the lower part of the frame were cut deep enough to hold the uprights firmly in place. The upper holes were deeper, so that you could push the rod up into them enough to allow the rod to slid into the frame and dropped into the lower hole. It made the task fairly quick to compete and you didn’t have to worry too much about the length of the uprights. The hardest part was weaving the horizontal withies between the uprights, especially as you reached the top. This job took much longer as we had to harvest more withies than we first thought. It was early November before the wattle was in place, even with me doing a panel whenever I had some spare time between the my work and maintaining the medieval garden. The next part of the job would be to add the daub to make the  walls more solid and keep out the bad weather. I suspected that the roof would have been thatched first and that the daub would be applied during the spring and summer, but needs must, and I would be daubing at the coldest time of the year. Sam and Tim didn’t sound so keen to do that and decided to skip the daubing. Sam had met a thatcher during a country crafts event and had arranged a lesson in the early part of the following year. The frame which had been a little wobbly, was very solid once the wattle was completed.

I began the daubing during the latter part of November. I had scythed and dried some long grass as we didn’t have a supply of muck. Jane Baile, the owner of the manor, had been carrying out an archaeological dig close to the pond, where she had found a good seam of marl clay, which I could use for the daub. Traditionally, a pit would be dug and the clay and manure could be trodden to form a pliable mix for the daub, the fibres in the manure acting in a similar way to the fibres in fibreglass, adding strength. I found a disused meatal feed trough that had been used for the sheep. I barrowed the clay to the trough which I had placed close to the hut. I emptied the clay into the trough, cut lengths of hay and added those and then several buckets of water from the well. I then had to mix it all by walking up and down the trough. I wore wellington boots, so they kept coming off in the sloppy mix. It was also very cold weather that year. My feet soon became very cold. I got wet from splashing the water and then I had to push the mix into the wattle sections; my hands felt like blocks of ice and I rarely felt my fingers after the first half hour of work. This is what led me to the conclusion that the work would be carried out during warmer weather. It would also help the daub to dry more quickly. I threw handfuls of daub onto the wattle, but then had to push it into the gaps. I used fingers and a wooden float that I had originally made to smooth the surface. It was slow, cold work. It took many weekends to complete the job of daubing the outside and the inside, but eventually I finished and heaved a huge sigh of relief and satisfaction.

I also used and clay to cover the floor. I made a thick slurry-like mix and spread it out and left it until it was nearly dry, when I used the float to level it off and smooth the surface.

I made the door from an old table top. I had t reduce the length to fit it in the doorway, so I left a three-inch protrusion at each end of one side. I bored holes that were slightly wider than the lugs I had made; and again the one above was a deeper hole than the one at the bottom of the door frame. I then slid the top lug into its hole and pulled the door into the frame until the bottom lug fell into the hole. Volia! A door without any metal hinges. It never fell out and stayed in place until the day the hut was destroyed. I had some solid pieces of seasoned oak, so I carved two sockets for a rising bar to secure the door when it was closed. I made the window shutters from elm panels and again I used the lug system instead of hinges. I made two wooden sockets to take a sliding bar to keep the window shut.

Christmas and New year passed quickly. Sam went on his thatching course. It lasted for all of about three hours. The straw was ordered and delivered. Sam made the tools we would need. The first task was to make a thick straw rope for the ridge which was tied in place with tarred twine. I had an old butchers needle that I used at work when I was a butcher. It was originally used for pushing through poultry to tie the legs and wings in place, but it was equally good for pushing the string from the outside of the roof, around the bundles of straw and then pushing it back out again. This time I was the labourer, making up the bundles of straw and tying them, before passing them to Sam on the roof. We were all surprised at just how solid the building was now it had been daubed. Just as well, as Sam stayed on the roof as I passed things to him. It took us a weekend to finish the thatching. For the sake of authenticity, we only used hazel rods to hold the straw in place. I had tried to make the twists, U-shaped pieces of hazel that hold the rods on place, but it was harder than it appeared, so we had bought some from a local woodsman who looked after several coppice areas. Chicken wire covering was also not historically accurate for the medieval period, so that was the job finished.

Later in the spring we bought some ready-prepared lime wash that I painted onto the daub to help make it waterproof. The lime wash was very watery and expensive. £40 per drum, which did not cover much daub. It took four drums to paint the walls on the outside.  In future I made up my own lime wash, which saved a fortune. Any lime wash that spilled on the floor was spread so that eventually the floor had a thick layer of lime plaster and was much harder wearing than just the clay. 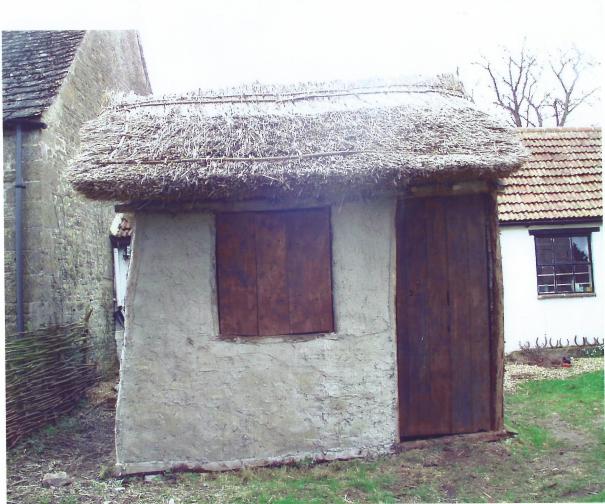 In April 2000, Sam, Tim and myself put a thick layer of straw on the floor and after a meal and a few drinks we slept in our medieval hut. We had chosen a very frosty night, but we were as snug as bugs in a rug.

I had already made some medieval garden tools and a wheelbarrow, so these now had a good home.

The Hut in snow

The hut was used for living history events and over the years I spent a few more night in it. It had been a very good project and I learned many different things from my time working on it. One was that the angle of the roof was too low, only 30°at most. It should have been no less than 45° to throw off the water properly, so our roof began to rot sooner than it should have done. I began to repair the thatch, but there wasn’t the money to buy enough straw.

The Hut in early summer

I am sorry to hear that the hut has gone, I have fond memories of it.

2 comments on “The Gardener’s Hut”