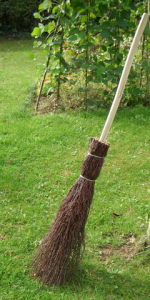 As it is Halloween, I have decided to put up a suitable post.
Witches are meant to fly on their brooms, but why brooms? Every woman would have hada besom broom to sweep the house.

If the tales were written now, the witch would have to have a vacuum cleaner of some sort. The broom head was often made of birch branches, and the plant that still has the common name of Broom, Planta genista. 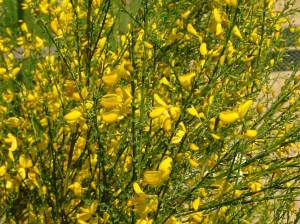 Broom, Planta genista, the plant named after the item that it was most used to make.

But does the broomstick fly, or not, and if so, how?

Surprisingly recipes for flying ointments do survive. The recipes include the fat of unbaptised children and several other unsavoury ingredients, but the ones that really matter are plant based.

Henbane, Hyoscyamus niger, is usually the main active ingredient. Monkshood, Aconitum napellus, is another one. Both are toxic and overdose can result in death. Aconitum was the poison used in the ‘Curry Murder’of 2009 when Lakhvir Kaur Singh killed the man who had jilted her, Lakhvinder Cheema, by poisoning the curry that she had made for him.

Henbane is very much suitable for a flying ointment, as proven during a Channel 4 series some years ago. Under medical supervision, people were given natural plant based drugs to see how they would be affected. Those taking Henbane reported sensations of flying.

The witch who wanted to take her broom out for a trip to the local sabbath would make up the flying ointment. Any animal fat, such as the skimmings from the broth, would make a good base for the ingredients. The witch could then either rub the mixture onto her body or onto the stick of the broom. Woman in early periods did not wear underwear, so the hallucinogenic properties would be quickly absorbed into the body. The witch would then feel as if she was flying.

I should point out that it is definitely not advisable to try this yourself. The plants are poisonous and as already mentioned, have killed people in the past.